So, there I was, in the middle of a serious negotiation for a new camper. The wife and I were working the salesman over, trying to better our trade-in when I happened to look at my phone and see a message from everyone’s favorite uncle, Tio Gomez!

“Any interest in testing out the new ICT?”

So here we are and away we go! 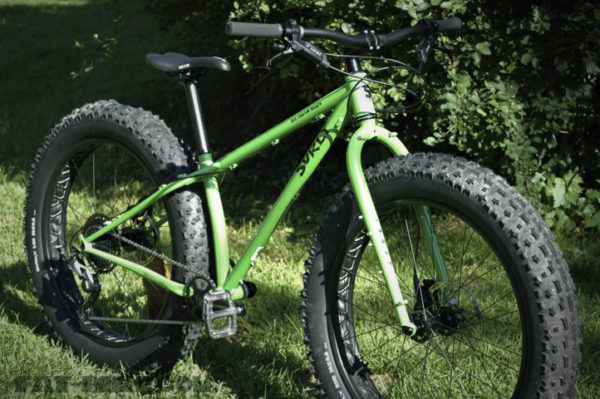 I got MY OG Ice Cream Truck in December of 2015 and it’s everything I hoped it would be, FUN, FUN and more Fun!  Though there are a few other fun bikes in my garage, the Truck is my year-round go to.  #fourseasonfatbikes

How did Surly expect to improve an already super awesome bike?!?  Let’s find out.

My Truck is an extra small because I am short (5’5” with a 29” inseam), so I wanted low stand over height and a more upright riding position.  It’s been awesome for my neck (2 herniated disks).  When I heard that Surly got rid of the XS I was bum’d BUT was interested in how the new small would fit me. They have also changed up the spec on the complete ICT.  It now includes such things as a 1x drivetrain (previously a 2X) and My Other Brother Darryl rims (with Bud and Lou along for the ride) instead of Clown Shoes or the Rolling Darryl’s that my ICT-OPS came with.

Now let us get a bit Scientific

I like to see numbers side by side when trying to compare gnomes to gnomes, so I put together a handy dandy chart to see how the geometry of the new small fits between the old x-small and small. A few things I’ve noticed right off the bat after ceremoniously unpacking and building the new Green Machine: A day or so after the box arrived from The Mother Ship “Q”, my family unit had already planned a weekend getaway when my spouse read my mind and asked if we were going to bring both the Ice Cream Trucks along.

“YES, because Science and stuff!”

My wife is not one who is in her comfort zone on a bike, at all.  She has ridden my Truck a few times and liked how stable it is compared to her bike but was all about the new ICT.  I think it’s the color.  While camping, she grabbed that Plutonium Sparkle Green Machine whenever she went for a ride around the campground.  She was so comfortable on it she kept asking if we could keep it.  That right there says something about how awesome fat bikes are, they can generate spousal approval!

We camped at Rock Cut State Park, near Rockford Il, because there are a ton of activities for families, and they have several trails to rip right from one’s camp site.  FYI, these trails are a bit rough.  Not much trail maintenance, if any, eroded, roots, hardpacked sandy soil with sand pits at the base of hills and A LOT of mosquitos!  Perfect for back to back rides on the ICT’s.  I’m not going to get too deep into a ride report here (gotta generate a bit of suspense!), but I am enjoying the subtle differences between how the 2 Trucks ride. I rode the Green Machine stock at Rock Cut and this past weekend’s Beulah Boogie Race in Zion IL, and it rides quite well, but after riding mine for so long, I realize that there is so much room for growth.  The main differences between my Truck and the new Green Machine are that I ride a 1x XT setup (new is SLX) with a bit different gearing (28-40 vs the new @ 30-42) and semi-custom bars (a sweet collaboration between Oddity and Black Sheep Bikes).  I’m now ready to ride the snot out of this newer rendition of Surly’s Ice Cream Truck. You can look for a review in a month of Sunday’s or maybe just a few dozen more test rides or whichever comes first.

So, stay tuned true believers. I plan to ride it like I stole it as long as they let me and see how the new Ice Cream Truck stands out from what came before it. If you’re interested in digging deeper into the theory behind and specs of the new Ice Cream Truck, more info is to be found  here and  here.

Let’s not forget Spinner’s preview and review of my beloved ICT-OPS here and  here.